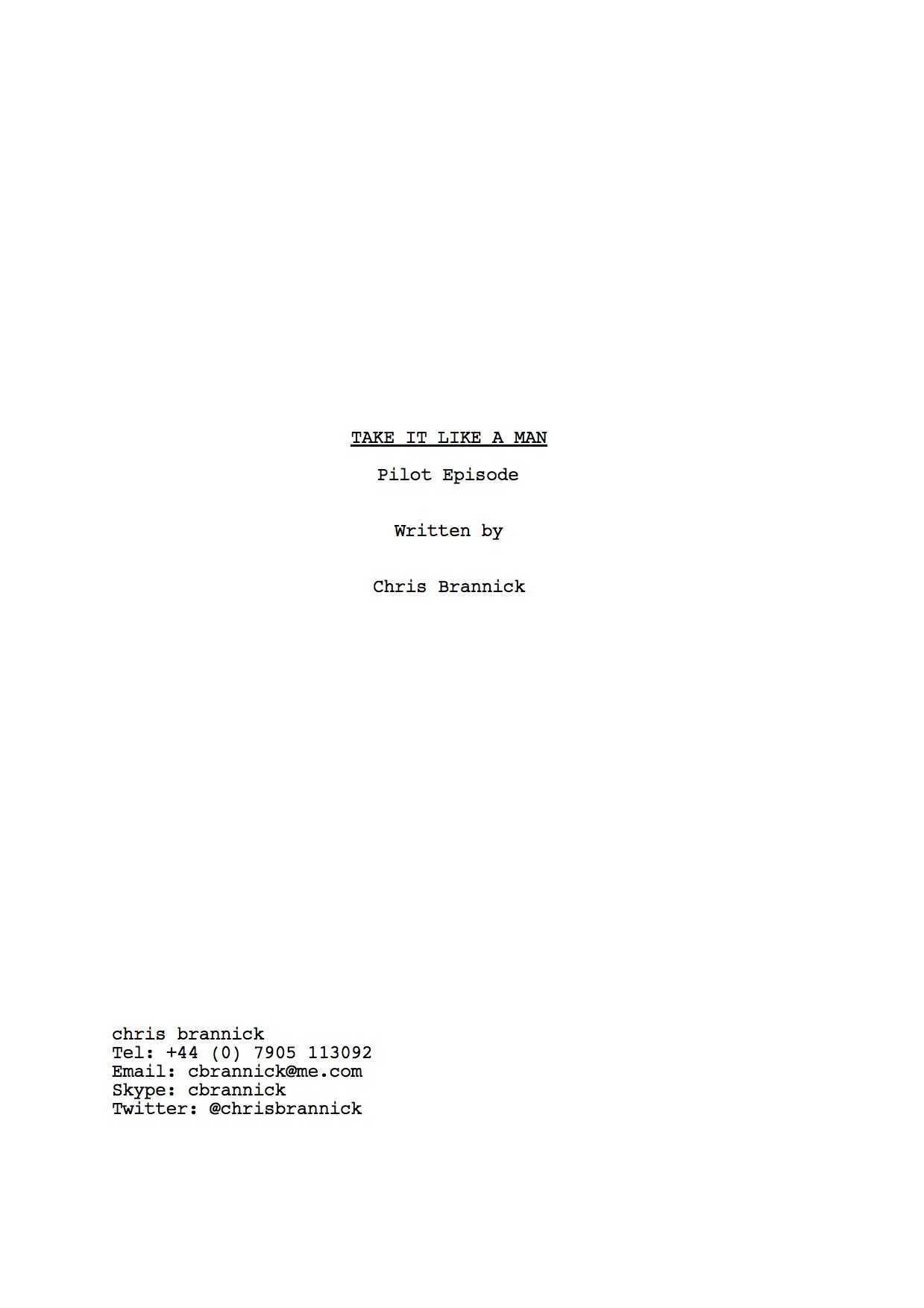 Take It Like A Man came out of a competition to write a TV pilot script. It’s my first attempt to write anything of this sort, so please do take the time to let me know how it reads – especially whether you ‘believe’ the characters, and whether they come across as 6/7 different voices.

Use the comments box or send me an email.

“Athletic college student Brad Hickey tracks down the father he’s never met and finds that he is now in a gay relationship with a younger man. Trying to become best friends with his dad again leads him to question what it means to be a man in the 21st century.”

Intrigued? I hope so. Here’s the script – I’m sorry I can’t paste it direct without losing all the formatting.

Who’s in it? 6 main characters:

Brad Hickey – the lead character, through whom the story is told. He’s 20 years old, athletic, a real ‘man’s man’. He’s never met his father and has been brought up by his mother Maria, who has tried to school him in how to be a man. He’s content, naïve, positive and inescapably honest. He’s straight, in every sense of the word. He’s a bit Forrest Gump. He’s in the college football team, and is taking a course in social studies.

Jeff Tannerby – Jeff split from Maria before Brad was born, aware that he was living a lie. 50 years old, he’s found himself. He’s camp, in a relationship a younger man, determined to make the most of the second chance that life has given him. He’s always trying to find the shortcut to a good time. He works in the entertainment industry as a production manager.

Maria Hickey – has brought up Brad as a single mother and shows the strain of  the task. She’s proud, a bit younger than Jeff, just a little bitter at the cards that life dealt her. The conflict between her and Jeff will provide much of the engine that drives the series. If she had a motto, it would be ‘life’s a bitch and so am I’. Now that Brad is ready to look after himself, Maria’s ready to find herself a new man – but he has to be someone better than Brad’s father, Jeff. Her real estate business is successful enough to give her a comfortable income.

Tony Martello – Jeff’s partner, although work pressures mean that he’s still not come out as gay at work. He was born middle-aged. He would be described as OCD, but he hates the term because the letters aren’t in alphabetical order. He takes particular pride in ironing his underwear. Being 28 years old, he’s nearly Brad’s generation, so they’re never quite sure how to respond to each other. To Tony, fun is a serious business.

Lara Purfleet – she’s sweet, sexy, clever and caring. The perfect girl next door, so it’s lucky that she lives next door. She and Brad have been friends since childhood, but they’re too close to ever have had a romantic link. She’s a bit of a tomboy, practical and artistic and is studying electronic engineering. She wants people to be happy and to get along. She spends much of her time looking after Brad and helping him out when his plans go awry.

Lily Burlowsky – the elderly neighbour of Maria. She’s mid-70s, widowed and has a waspish sense of humour. She’s interfering but doesn’t take anyone or anything too seriously. She wants Maria to find a new man and wants Brad to grow up. She always says what she means, even if it’s hurtful, and she enjoys gossip and causing mischief. She’s exasperating but fun, and is fond of a glass (or two) of cheap bourbon.